The Just For Laughs Festival présente 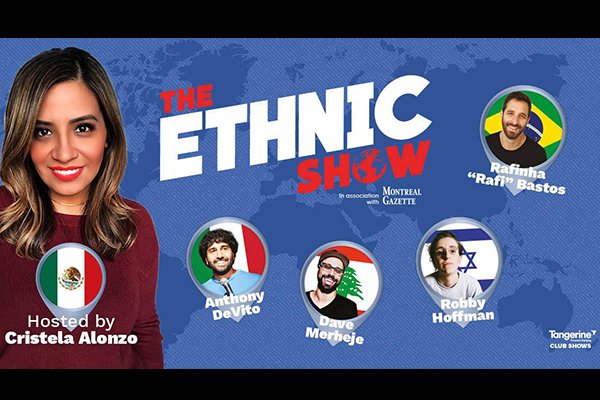 THE ETHNIC SHOW is a hilarious celebration of global perspectives featuring a lineup of comedians who are as funny as they are ethnically diverse. This cultural melting pot of comedy is as multi-cultural as Montreal! No matter who you are or where you’re from there’s something for everyone. Don't miss this rainbow coalition of comedians as they poke fun at traditions, customs and cultures in the most hysterical ways. Hosted by Cristela Alonzo, featuring Dave Merheje, Robby Hoffman, Anthony DeVito, Donnell Rawlings, and Rafinha "Rafi" Bastos!

Cristela Alonzo made history in 2014 when she became the first Latina to create, produce and star in her own network sitcom, Cristela for ABC. During that same year, she split her time between LA and NYC to serve as one of ABC’s favorite guest hosts on their hit daytime talk show, The View. In 2017, Cristela made history again when she became the first Latina lead in a Disney Pixar film when she voiced the part of “Cruz Ramirez” in Cars 3. Currently you can see her stand-up special, Lower Classy on Netflix.

Cristela established herself in the stand-up world with her half hour special for Comedy Central and numerous appearances on Conan, The Late Show with David Letterman, Jimmy Kimmel Live, and The Late Late Show with Craig Ferguson. She has topped multiple comedy power¬player lists including "Variety's Top 10 Comics to Watch," "Top 10 Comedy Acts to Watch" by LA Weekly, Time Out's "Comics to Watch," and "One of the 50 Comedians You Should and WILL Know" by Vulture.

Dave Merheje is considered to be one of the most original standup acts on the comedy scene today. He’s made appearances on Comedy Network’s Match Game, was a regular contributor on MTV Live, recurred on CBC’s Mr. D, and is currently appearing in the new comedy series Ramy on Hulu.

Dave has made multiple appearances at the Just For Laughs Festival in Montreal, JFL42 in Toronto, Winnipeg Comedy Festival, the Halifax Comedy Festival, the Melbourne International Comedy Festival in Australia, and tours clubs and theatres regularly. In 2018 Dave released his comedy special “Good Friend Bad Grammar” which is available on iTunes and Amazon Prime, and is nominated for a 2019 Juno Award for Comedy Album of the year. His most recent comedy special, Beautifully Manic, can be seen on Netflix as part of Comedians of the World, right now.

Anthony DeVito made his network television debut on The Late Show with Stephen Colbert in 2017. His stand-up has been featured on Comedy Central’s Adam Devine’s House Party, AXS TV’s Gotham Comedy Live, Seeso’s New York’s Funniest, and Comedy Central's The Half Hour. He co-wrote and was a regular panelist on MSG's People Talking Sports and Other Stuff with Sam Morril. He can be heard on NPR’s This American Life, The Rad Dude Cast, and his debut comedy album Dream Occupation, by Comedy Central Records. DeVito was a staff writer for Netflix's The Break with Michelle Wolf and contributed to the 2018 WHCD speech.

in 2018 Robby was named one of Comedy Central's UP NEXT comedians and on Conan O’Brien’s Comics to Watch list. She was a headliner for the New York Comedy Festival in 2018 and recorded her first one-hour TV special, I’m Nervous, at JFL42 in Toronto for Crave TV.

2019 has been a big year for Donnell Rawlings so far, as he is currently on his Funny Moves Tour. He just shot a role in The Jay and Silent Bob Reboot film, and was also a guest on The Joe Rogan Experience Podcast. He can be seen starring in Kevin Smith’s Hollyweed, The New Negroes on Comedy Central, Historical Roasts with Jeff Ross on Netflix, and TBS’s The Last OG with Tracy Morgan.

Previously, Donnell hosted his own show as Judge Rawlings on MTV2’s Guy Court, and was a cast member on MTV2’s Guy Code. He has also appeared in a number of TV shows, including TLC’s Project Dad starring Donnell and his son, The Shaq Comedy All-Stars on Showtime, host of Staann' Dup on Starz in Black, and the hit animation Black Dynamite where he lends his voice in a recurring role as “Another Cat Named Rally”. As an actor, Donnell has also appeared in the Law & Order series, Special Victims Unit (SVU) and Criminal Intent (CI) as well as NBC’s Third Watch, the Emmy-Award winning HBO Mini-Series: The Corner and as Day-Day Price on HBO’s Emmy-Award winning series The Wire. On the big screen he can be seen in the blockbuster Spider-Man II.

In 2016, Donnell was featured on Saturday Night Live in the famous Walking Dead sketch when Chappelle hosted. You’ve also seen Donnell as 'Ashy Larry' on Comedy Central’s award winning and critically celebrated Chappelle’s Show, where he joined Dave Chappelle as both as a writer and performer. He was also featured in Queen Latifah's movie Percentage, and his 1-Hour Stand-Up special “Ashy to Classy” premiered on Comedy Central in October of 2010.

His rise to stardom may not have been “overnight”, but the journey itself has kept him edgy and relevant. Comedy's heavy hitters have noticed his talent with Neal Brennan, co- executive producer and co-head writer of Chappelle’s Show exclaiming “whenever we put Donnell in the game he’s going to hit a home run.” Jamie Foxx says, “That guy is a beast!” Wayne Brady commented that Donnell provides “amazing work on the show” and Dave Chappelle feels that “Donnell brings so much to the table...this very funny guy makes it look natural and easy”. Donnell continues to tour heavily, performing his intelligently bold stand-up throughout the US, Europe, and the Caribbean.

With a career spanning over 15 years, and a grasp at raunchy humor that sells out theaters everywhere he goes, Rafinha “Rafi” Bastos is one of the most important and well respected comedians in Brazil. Also an actor and journalist, he is amongst the 30 most watched comedians in the world on YouTube, with videos that have more than 250 million views. With over 11 million followers on Twitter, the New York Times has deemed him one of the most influential people in the world.

Bastos is the owner of the biggest comedy club in Latin America (Comedians in São Paulo). Since 2010, his achievements in Brazil include the executive production of the Brazilian version of Saturday Night Live, a series of shows on national network television (CQC and A Liga). He wrote the script, produced, and directed a show about his own life, The Life of Rafinha Bastos, on the FX channel.

As if that weren’t enough, he also acted in four other series and eight different films. One of his greater success stories thus far, is having written the script, produced, and acted in Internet - The Movie, which after being released in theaters in Brazil, it had its rights bought by Netflix and is one of the most watched movies of the streaming service in the country.

Currently based in Los Angeles, he’s a regular performer at major comedy clubs in the city, such as the Laugh Factory and the Improv. He also hosts the competition show Ultimate Beastmaster, on Netflix. His third stand-up special, Ultimatum, an original Netflix production, was released September 21, 2018. Rafinha’s previous stand-up specials were also licensed by the streaming platform, and his very first special, A Arte do Insulto - The Art of the Insult, was the first local content available on Netflix Brazil in 2011.