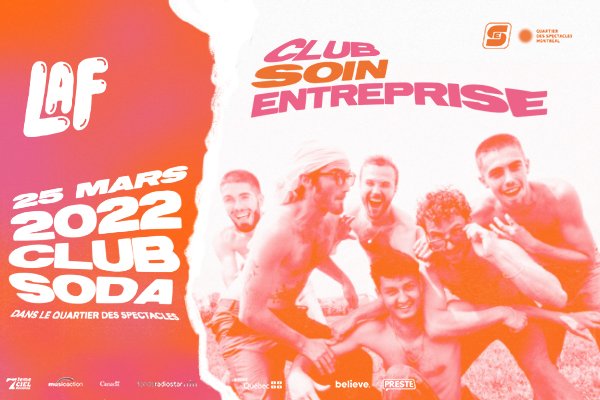 POSTPONED from March 14 to September 6 to May 29 //_  After a sold-out night in Montreal for the launch of the new album Citadelle on October 11th at the Fairmount Theater, LaF is planning a second visit of their microcosm on May 29, 2021 at the Club Soda in Montreal.

Revelation of the new rap guard queb, LaF (pronounced "la-èf") is a group of 6 Montrealers, friends since the CEGEP. Having first made their teeth on stage, the sextet is undoubtedly renowned for their electrifying performances; they are also the winner of the famous competition showcase Les Francouvertes in 2018. With a reception that is unanimously according to the critics, "Citadelle", the first opus of the group appeared on the label Disques 7ième Ciel, offers a production alternative rap combining soul, jazz and sometimes pop sounds. The result is a hybrid style, meticulous and accessible. As for the text, there is a predominance of melodies and the presence of ambient melancholy, characteristic invoice of the three rappers. Their feathers, firmly rooted in emotivity, testify to the band's broad influences, from Quebec indie rock to European rap.