Money Back Guarantee in the first Fifteen minutes if you’re not satisfied ! 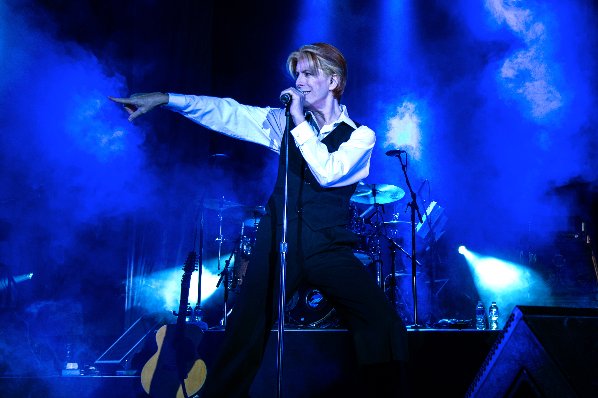 This full-scale stage production, from Los Angeles, is complete with flamboyant costume changes, elaborate staging, perfectly emulated vocal stylings and one of the best backing bands in the business. All of the many faces of Bowie are present… from stadium-sized pop phenomenon, to space-age rock and roll alien Ziggy Stardust… and so is the excitement and electricity.

David Brighton's credits include performing side by side with David Bowie himself in the TV commercials for Vittel Mineral Water and for Reality - Bowie's CD. Brighton has performed as a resident cast member of the world famous Legends In Concert - Las Vegas production show. He was also cast to portray David Bowie in the Warner Brothers feature film, The Watchmen. He also appeared as David Bowie on VH-1 television as well as in international pop star Shakira's concert video.

Before entering the world of celebrity impersonation, David played lead guitar with a number of popular recording artists. His stint as a sideman began with a phone call from Kevin Dubrow of Quiet Riot. Dubrow tapped Brighton to replace the legendary guitarist Randy Rhoads. David also enjoyed portraying George Harrison around the world with a number of the world's top Beatle groups, including Rain, The Stars of Beatlemania, The Fab Four, 1964, Twist And Shout, Classical Mystery Tour, and When We Were Fab.